Morna has volunteered for numerous organizations in our community, and in our opinion, has a heart of gold. Find out more about her on her website: MornaKelly.com and on Facebook: Facebook.com/GOPMorna

If you consider yourself a conservative first, and a Republican second, then Nancy Riley wants you gone.

7/29/2016 Addendum: Since we first posted, we were made aware of another Facebook posting where Nancy Riley refers to conservatives as “Nasty” “angry” and “low class“:

It is our opinion that Nancy Riley is out of touch with the base of the party and should be retired by Pinellas County voters in the August 30th primary. Mail-in ballots have already been sent by the Pinellas Supervisor of Elections.

If you found this article helpful, please help us continue to hold our elected officials accountable by making a generous contribution today. 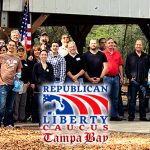