Pinellas County voters: there is an election on November 6th. Mail-in ballots have already been sent. You can check your voter registration at VotePinellas.com.

In every race, we try to select the candidate or position most likely to represent the conservative, Constitutionalist, limited-government grassroots. Our voting recommendations are below:

School Board Member, District 2 – At Large

School Board Member, District 3 – At Large

For more information on the Amendments, check out Liberty First Network’s detailed explanation of each.

Amendment 12, Lobbying and Abuse of Office by Public Officers

No. 2 Hillsborough County Referendum: Funding for Countywide Transportation and Road Improvements by County

Please donate so that we can pay our server bills and bring you future voter guides. 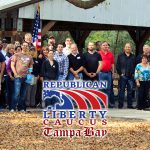