Liberty Republicans oppose all forms of corruption in government and within the Republican Party.  We have seen our essential liberties taken away by vain and ambitious men and through the warping of the political process to serve powerful individuals and special interest.  The must end within our party and throughout our government.

When Republican politicians are the authors of malfeasance it is our duty to hound them from office at any cost. A malefactor of great power should not be protected because of his position, party or his influence. Corruption is treachery to the people and we cannot let it stand.

The disregard for our liberties and the Constitution shown by our elected representatives in unacceptable.  We have seen our rights of free speech, religion, assembly, privacy, due process of law, equal protection and more, sacrificed on the altar of expediency and offered up to the false gods of security and and necessity.  Our institutions are out of control, from unaccountable surveillance at the NSA to militarization of domestic police.  We must reclaim these rights and reassert the protections guaranteed under the Constitution and establish a new culture of accountability.

We also face the corruption of our party institutions.  The RNC, the NRSC and the NCCC no longer work for the Republican voters, they serve special interests and their priority is protecting incumbents.   Even more troubling is the emergence of powerful PACs specifically focused on spending enormous amounts of money against Liberty Republicans.  Crossroads PAC, Mainstreet PAC, the Chamber of Commerce and many others have thrown in with the establishment and are spending enormous amounts of money to prevent any realignments in the party.

In the recent past we have seen massive abuse of power within the party.  State party leaders have committed crimes and abused our trust.  They have set aside party rules, removed legitimately elected officials, run fraudulent party elections and even corrupted our national nominating convention.  All of this in service of candidates like Mitt Romney and Eric Cantor who have failed to lead and failed to get elected.

All Republicans should be concerned about this, but Liberty Republicans have a special obligation to support not just a change in ideology in the party, but also a change in the culture of corruption which has enabled so much political abuse.  It is this which leads to bailouts, special favors, the breakdown of the free market and the encouragement of monopolies.  Corruption in government leads to corruption of all our institutions.

Sam Adams said, “If ever a time should come, when vain and aspiring men shall possess the highest seats in Government, our country will stand in need of its experienced patriots to prevent its ruin.”  That time is now. 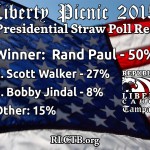